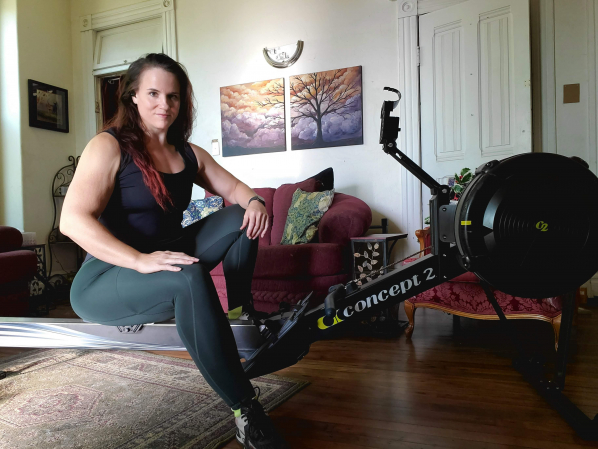 If you look up the records for the SkiErg in the age category Women 30-39, one name will jump out at you: Morgan McGrath. In the last year, Morgan has gone for almost every SkiErg record possible—and has claimed the majority of them—but things didn’t start out that way.

Morgan was athletic growing up. In college in California, she competed on the track and field and tennis teams. But then something strange happened: she started gaining weight. It didn’t add up. Morgan wasn’t overeating, and she was still an active athlete. She went to the doctor, where they told her it might be a metabolic problem and they put her on medication. “I was sick all the time from the drugs,” says Morgan. “After college, I decided I couldn’t do it anymore. I stopped the medication and accepted that this is the way my body was.”

Without treatment, Morgan gained 200 pounds, taking her weight to more than 400 pounds. But then her father, who had always encouraged her athleticism, was diagnosed with stage four cancer and Morgan’s life changed again. “It makes you re-evaluate your life. I was losing my chance to make him proud. It makes you feel really mortal when someone close to you passes away,” she says.

Morgan decided to undergo a bariatric surgery and had half of her stomach removed. It worked. She lost more than 200 pounds and continued implementing lifestyle changes to help support the weight loss journey. “I discovered that I’m not self-motivated to exercise. I respond and work well with groups. I love encouraging other people and I feel encouraged when I work out with others,” Morgan says.

She joined a local fitness center, which provided her with the motivation and team support to exercise. It was here that Morgan first got on the Concept2 RowErg. “I did my first workout, and during it I kept thinking, ‘This is awful. Everything hurts and I can’t breathe!’ But after the workout, I felt really accomplished and like I got a great workout in,” she says. 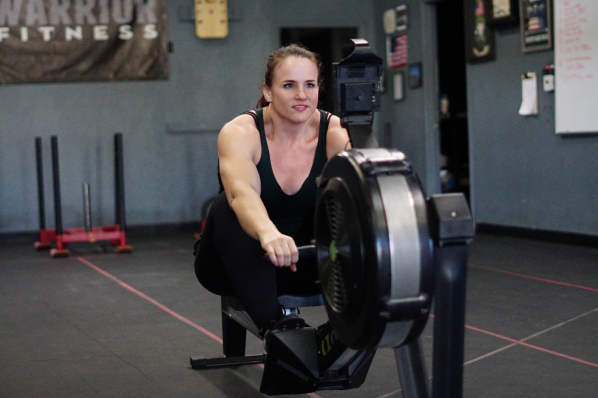 A coach suggested that she try entering her scores in the Concept2 Logbook. Morgan was shocked. “I had no idea there was more to this machine. I went online, found the logbook and put in my numbers. It ranked me 10th or so in the world. I couldn’t believe it was possible,” Morgan laughs. She then adds, “I am a data analyst by day, so when I found out this rowing machine had a wealth of data, I fell in love with it.” It opened up a whole new world for her.

Morgan worked to get her times down on the rowing machine, she signed up for competitions, and she won. At her first race, Morgan was a fish out of water. She had never used split times before, and it seemed like everyone else in the room knew what they were doing. The woman next to her helped explain the split times and told her when to get ready. Morgan went for it, clocked a 7:13 time for the 2000m race, and ended up winning the event. Her new friend was astonished.

The successes kept coming and they eventually led her to international competitions like the World Rowing Indoor Sprints, the World Games, and the World Urban Games. She says the community has been paramount for her. “It was so cool, at the World Games, I went across the world to Poland and got to meet people that I knew through the online rowing community and feel like I was part of a family,” Morgan says. But Morgan didn’t stop there. After years of improving her times on the rowing machine, she decided to give the SkiErg a go. It was a similar story.

“I tried the SkiErg once in 2019 to take part in the SkiErg World Sprints. I went out and found one just to try it. But I hit a wall at 500 metres and thought, ‘this is awful, it’s worse than rowing!'” Morgan says.

Little did she know, a year later her fitness center would acquire some SkiErgs. “It was a terrible learning curve. I hated it for the first month or two,” Morgan says. But she persevered and a few months later participated in the 2020 SkiErg World Sprints when she broke the 1000m World Record, finishing with a 3:29. Last year she took part in the Concept2 Tour de SkiErg Challenge and set new world records in each of the four distance categories, before going on win the 40–49 age category in the 2021 SkiErg World Sprints with a time of 3:20.7.

Morgan has become an avid fan of both machines and now also has a BikeErg at home. She incorporates all three pieces of equipment in her training and competes on all of them, and she doesn’t plan to retire anytime soon. “I am already eying those 90+ age group records,” Morgan laughs. “I’ve met so many wonderful people along the way, I’m excited to see how they do and hope to be competing against them for many years to come.”

@BigSi2301 Nice! Sign up for a free online logbook account and go from there t.co/ygVj5SnvMa @Concept2UK about 2 weeks 2 days ago.