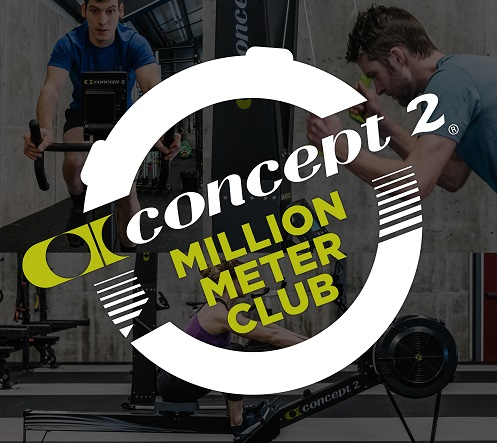 The Concept2 Million Metre Club was started over 30 years ago. There are thousands of personal stories behind each metre, and we love sharing them.

First, how it works: Every metre you ever row, ski or ride counts! Once you count up to one million metres (or more) by logging them into the free Concept2 Online Logbook, we recognize the accomplishment with certificates and prizes. There are separate Million Metre Clubs for the RowErg, SkiErg and BikeErg (metres can't be combined). And added bonus: it’s free!

The Million Metre Club started out as an excellent team motivator for their indoor rowing club but became a great way to recognize their regular exercise goals. Billy says he finds the Million Metre Club motivating because, “It is a reward system that encourages consistency. Each and every day that you row moves you closer to the next milestone. The beauty of it is that it doesn’t matter what you do, as long as you do something. All metres count no matter if you are doing drills, steady state, intervals or races.” His wife, Karen, agrees: “Just keep on rowing. We are into exercise for the long haul (e.g. our health), so it’s a lifelong activity. You will get there eventually. And you will never forget how good it feels to reach a million metre milestone!”

The prizes also help. “It’s the hardest that I have ever worked to earn a T-shirt,” explains Karen. Billy keeps working hard for those prizes, too. “My wife may disagree but, I believe you can never have too many T-shirts.”

Jenna Stedman, (4 million metres, RowErg), enjoys collecting the Million Metre Club pins and says, “Everyday I get to row is a good day.” She comes from a rowing family: her parents were rowers and served as her first coaches. Jenna started rowing in on water competition in high school and continued through college. Now, she’s working towards the goal of 100 million metres indoors.

She moves closer to that goal with long workouts. “My favorite workout is a long 20k on Saturday mornings. I warm up and foam roll. I listen to a podcast and close my eyes and focus on my form. I make a big green smoothie and peanut butter toast after. It's a great start to my weekend.” In addition to this weekly routine, she’s training to complete another 100k with the goal of setting a personal record. With workouts like that, she’s well on her way to 5 million metres and beyond!

It doesn’t take endurance workouts to rack up the metres; as Billy mentioned, consistency gets you there, too. Dan Lynch started rowing in 2015 and is now nearing membership in the 10 Million Metre Club. Dan created his own personal “streak” goal. He recently marked his 900th consecutive day of indoor rowing, averaging 8388 metres per day. While this alone is an accomplishment, Lynch completed this even though he was diagnosed with a rare and aggressive form of Non-Hodgkin’s Lymphoma in November 2018. With the consultation of his doctors, he continued staying active through treatments.

Dan recently ended up in the hospital with an infection. His streak kept going. “Two nurses who row as part of CrossFit offered to walk to the parking garage one block away and get the RowErg from my car, so my streak wouldn’t be interrupted. I had been admitted Sunday afternoon unexpectedly, but brought the erg just in case. So, I rowed on days 912 and 913 there, thanks to the nurses.” Dan followed Canadian Lightweight Masters athlete Stan Shatenstein's streak of 1048 consecutive days. He hopes to match Stan’s record on November 13, 2020, and surpass it the next day.

Stan rowed more than 12 million metres over his streak that ended in February 2018 and has now embarked on another long one, approaching 900 days. This brings him past 35 million metres. He’s added another 17 million metres on the BikeErg where he also maintains a nearly-as-long streak. Stan is modest of his accomplishments, but helps us keep perspective. “I know that, in the grander scheme of things, it's a very modest, even peculiar accomplishment. I didn't cure any type of cancer, nor even the common cold. Even in a sporting sense, it's nothing like rowing across an ocean or completing an Ironman triathlon, things that friends of mine have done. But I have run 50 marathons and rowed another 14 at this point, and I’m grateful to be able to keep going. I was thrilled to be able to row 100k to mark day 1000 in December 2017 and end the streak two months later for travel, not illness or injury. I’m cheering Dan on for every challenging day he puts in. No one would be more thrilled than I would to see him break my record. It [completing the streak] was something special for me.”

We wish all our aspiring and current Million Metre Club members continued success as they strive for their next goals.

@diane_parksy Hi. Please email info@concept2.co.uk with all the details and we’ll sort it out for you. Thanks, C2 @Concept2UK about 1 week 3 days ago.